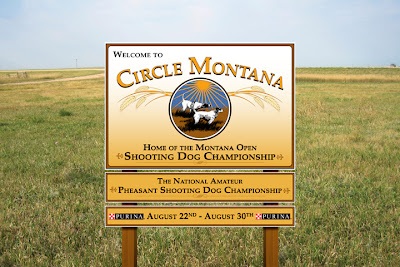 The Big Sky Field Trial Club has been invited to host the 2011 running of the National Amateur Pheasant Shooting Dog Championship at the storied grounds north of Circle, Montana. With the relocation of the Region 14 Amateur Shooting Dog Championship back to Stoughton, Saskatchewan, presently scheduled for September 2011, the dates previously occupied by that stake became available. Club president, Austin Turley, worked diligently with several members of the Trustees of the AFTCA to secure the National Amateur Pheasant Shooting Dog Championship for Circle for this year and for years to come. The popularity of the grounds outside of Circle, which have become well known amongst field trialers, being a primary factor. This represents a marvelous opportunity for both the AFTCA and the BSFTC.