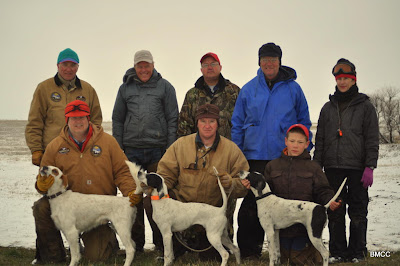 
2011 Big Sky Field Trial Club Shooting Dog Classic
by Brad McCardle
After a long winter, the old man finally released his grasp just long enough to allow our host to complete nine braces drawn for 2011 Big Sky Field Trial Club, Big Sky Shooting Dog Classic, which began Friday morning the 15th of April and wrapped up Saturday morning the 16th. Calm winds, sunshine and quality bird work were abundant for the gallery to enjoy the field and the prairie in the Buffalo Creek drainage just outside of Circle, Mt.

Judges, Butch Nelson and Sonny Clark, were on hand to sort out the winning dogs this year. Amongst the gallery were some of our Canadian friends, Dave Pearson, Keith Ennis and Terry Walsh. The latter of whom sponsored our prizes through Upland Electric.. Others in attendance were Tim & Robin Owen and their son-in-law, Cole and daughter/wife, Annie, Shawn and Glenn Conover, Tim Powell and John and Isaiah Todd. Tom and Shannon Nygard once again opened up their home to all for a dinner sponsored by the club and prepared by Glenn Conover. Glenn’s B-B-Q Pork was incredible!

We would like to thank the landowner’s for, again, allowing us to use the wonderful grounds, the bird population and beauty are unparalleled. We also appreciate our sponsors, Nutri-Scource, Tuffy’s and a big thank you to Terry Walsh and Upland Electric.

The Classic included 17 starters for the one hour stake. Sunshine and crisp air escorted us through the first three braces with many birds produced. Dave Noell and Magic City Sunrise, reigning Idaho Open Shooting Dog Champion started the first brace and set the bar with a stop to flush and a find. After taking a break for lunch prepared by Shannon Nygard, the fourth brace began and produced our first place dog, Lone Mountain Reliant. The Setter male, owned and handled by John Mandell, made several nice moves, showing maturity with a confident ground race and fine bird work with a stop to flush as well as a find on a pair of Sharptails and earning the top prize of the GunX stainless steel starter's pistol and custom made holster.

The last brace of the afternoon resulted in our third place dog handled by young Isaiah Todd. Isaiah handled Willow Creek Peg, diligently and patiently through CRP, wind breaks and gusty winds, showing Peg to the front for the judges. The Pointer female and recent Region 9 Amateur Shooting Dog Champion had two solid broke finds on Chicken’s in the last 10 minutes.

Saturday morning condition’s were much like the day before, with crisp air and a light breeze. The first brace resulted in our second place dog, Railita, owned and handled by Austin Turley and last year’s Montana dog of the year. Vi had a steady, strong and big ground race with a stop to flush on a Pheasant and a beautiful find on a single Sharptail. Vi continued to show nice manners at the end of her brace and was found standing flushed birds after time was called.

All three dogs performed well and made placement for our judges difficult. The three handlers are to be commended for a fine job of showing their respective dogs on Prairie grounds, loaded with birds. All of us are proud to see young Isaiah do so well in his first trial and are looking forward to watching him mature and carry the legacy founded by his grandfather, John Todd and upheld by his uncle, Ike Todd.

The All Age derby was held next, with eleven starters running the multiple courses. Once the dust cleared, the first brace of the stake saw two young male Pointers and, ultimately, our first and third placed pups. Shannon Nygard finished her husband's young pup, Circle Distant Buckaroo, which showed a promising All Age ground race, several large casts (and multiple bird work after time) to gain favor of the judges. Buckaroo’s brace mate, Prairie Ramblin’ Sampson was judged on ground race as well. Flatland’s New Look, owned and handled by Dave Pearson, showed a strong ground race for a derby and also had a find on a single Chicken, showing nice style for a youngster.

The All Age stake began Saturday afternoon and concluded on a snowy, windy and cold Sunday morning. Eight dogs were drawn and the condition’s made for difficult viewing. The winning dogs were all placed on ground race with Dave Pearson and appropriately Flatlands Whiteout taking the third placement. Longhollows Luke and Tim Powell took second and Railita and Austin Turley were rewarded with first place.

Completing the day was the Shooting Dog Derby, with sixteen dogs starting the stake. Not many birds were moved in the whiteout conditions and the young pups chosen for placement were judged on race. Judges john Todd and Tim Owen saw it as third place to Carbonado Pennita, Pointer female and Terry Walsh. Second place was given to Gin and Tonic Live Wire, Setter Female, owned and handled by Dave Noell. First place was awarded to Rambling Prairie Rebel and Austin Turley.

Thanks again to all those that attended, contributed their time, our sponsor’s, volunteers and host’s to make the Big Sky Shooting Dog Classic such a pleasant experience for everyone.