The Big Sky Open Shooting Dog Classic was once again held north of Circle, Montana in the Buffalo Creek Drainage.  The Big Sky Field Trial Club would once again like to thank the landowners whose generosity makes our trials possible.  Numerous landowners allow us access to their pastures and fields.  Tom and Shannon Nygard are also due great thanks for the use of their house, which sits pretty much dead center of all the courses, for the club banquet.  Unfortunately, Tom and Shannon's house suffered water damage due to a pipe break shortly before the trial, but they still opened their home to the club.

Along with landowners, support from corporate sponsors as well as is a great help.  Tuffy's Nutri-Source once again generously donated a pallet of their top quality dog food.  This was much appreciated.  Several of the local trialers already feed Tuffy's and a couple of the winning recipients of the food in the past have switched to Tuffy's.

The club would also like to thank the many Canadians who made it down for our trial.  Long distances must be traveled to compete in Region 14 and we would like to acknowledge those that were able to make it to our trial.

Friday morning started of with some wind, by Friday afternoon the wind was howling.  With the wind, many dogs had trouble getting their birds pinned, and some handlers had trouble getting the birds flushed.  Many unproductives resulted.  The number of birds seen though, was encouraging.  Saturday was a much more moderate day, and by Sunday afternoon the temperatures were starting to get rather high for this time of year.

The Big Sky Open Shooting Dog Classic ran eight braces total, starting Friday morning with breezy conditions , and growing to very windy conditions before the day was over.  These conditions certainly made bird finding difficult as the day progressed.  Our winner, taking home the Gunn-X Stainless Steel Pistol and custom made holster by WindFall Leather Works was Flatland's By Design, owned and handled by Dave Pearson.  Dee ran in the first brace Saturday morning.  She had a strong ground race and two finds.  Her second find had many temptations since her bracemate was involved with the large covey of sharptail she was pointing, yet she managed to maintain good manners and composure throughout.

The first brace on Friday morning produced our second place dog, Dave Noell's Our Rowdy Friend.  Rowdy had a good ground race, one sharptail find, and one unproductive.  Dave's veteran setter did not seem overly affected by the wind or the hour long brace.

The last brace on Friday produced our third place dog, Shannon Nygard's young setter, Glory Attack Jack.  Jack pushed the other two winners with his ground race under very windy conditions, and had a divided find on sharptail.

The first brace of the all age derby produced our first and second place dogs, Jobar's Big Sky Pete, owned by John Junnila,  ran a very strong well directed race.  His bracemate, Rock On, owned by Doug McKenzie, did a commendable job on the ground also.  Third place, Northern Prairie Lights , owned by Glenn Conover ran a good, snappy race with five finds.  Several of which were of some distance, displaying good derby manners on each of them.

In the all age, first place was awarded to Flatland's Big Show, Dave Pearson, with a very strong all age race.  Second was Black Crude Joe, owned by John Junnila, with a strong race and a good find.  Third place went to Ride The Trail, owned by Butch Nelson.  Trail was placed on ground race.

The final stake of the trial, the shooting dog derby was won by Winchester's Juno, owned by Tim Owen.  Juno ran a very good shooting dog race with numerous pieces of mature derby birdwork.  Second and third place were bracemates,  Glory Attack Jack, owned by Shannon Nygard, and Rock On, owned by Doug McKenzie.  Both dogs were placed on ground race. 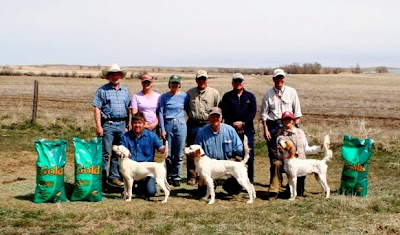 Terry Walsh with Flatland's By Design,  Dave Noell with Our Rowdy Friend, and Shannon Nygard with Glory Attack Jack