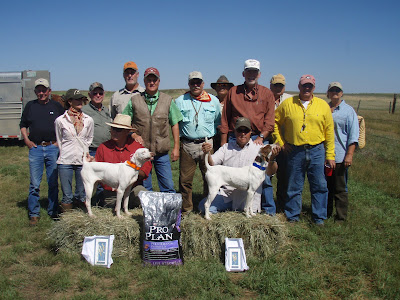 The 2009 Region 14 Amateur Shooting Dog Championship drew 65 dogs on the night of August 20 at the Wooden Nickle Restaurant in Circle, Montana. The overwhelming response to the call for entries surpassing even the most optimistic expectations. Judges Mike Furney of Panama City, Florida and Dr. Lou Qualtiere of Saskatoon, Saskatchewan rode a dedicated watch. The winner emerged in pointer female, Heard Hill's Queen Mary owned by Buck and Lynn Heard of Moultrie, Georgia. Mary was ably handled by Alabama native, John Neely in the first brace of the event. Runner-up honors went to defending Champion, Bridges Lake Pat, owned and handled by Tim Moore.

The bird population was superb with the opening morning braces encountering 30 contacts with four varieties of birds! This would prove to be routine during the running. Weather even cooperated, for the most part, as we saw temperatures in the 90's only two of the five days of running. The friendly camaraderie of the event was equally outstanding as evidenced by last year's Champion, Bridges Lake Pat's owner, Tim Moore treating over 30 participants to a shrimp boil as a token of his win from 2008. None of us flirted with loosing weight during the feed.

Watch this space for the complete report as compiled by judge/reporter, Lou Qualtiere.