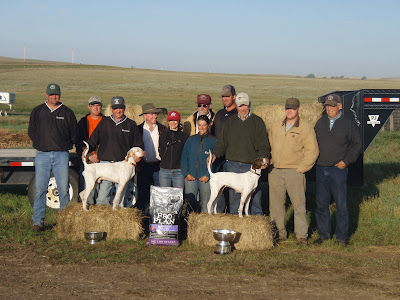 The running of the 2009 Montana Open Shooting Dog Championship followed on the heels of the Region 14 Amateur Shooting Dog Championship at the Scot Brown ranch in Circle, Montana last week. The running came off on the advertised date of August 25 but did so with an afternoon start to accommodate the huge number of entries in the Amateur Championship. Judges Harold Ray of Waynesboro, Georgia and Dave Noell of Billings, Montana crowned Hawthorne Kate, pointer female handled by Jim Tande and owned by Tande and Dan Miller as the 2009 Champion. Runner Up honors were anointed to Nella Running Tab, handled by Sean Kinkelaar and owned by Vagas Mathiesen.

The grounds at the Scot Brown ranch were in great condition for the event and held vast numbers of birds for the dogs to locate. The finds were focused, equally, on all six, one hour courses and the participants were quick to agree that every course gave an equal chance to produce the winner.

Dave Noell will publish his report in the ensuing weeks. Watch this site for it first.